This guy is a class act.  Period.  I’ve met a lot of people in my life.  Growing up in hood, and my sudden rise to president of dangeroushockey.com (joke) I’ve met lots of personalities, celebrities, athletes etc in my line of work (really the ad biz).  This guy is a the pinnacle of class acts.  For real.  And I have no agenda, I just like people who are the real deal.

And for him to pretend he likes my blog when he probably wants to punch me in face or hit me with stick (like the HBO guys), is another example of why.  Although if he had time to read it, he’d like it.  I assure you.  I’ll have more breaking/interesting story but need his permission. 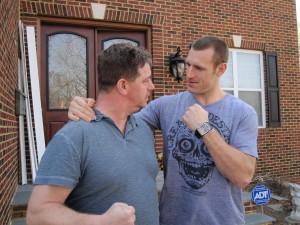 This is why I’ve decided that I’m now officially a Caps fan.  But mainly a Brooks fan, so if Ted doesn’t sign him to a 17 year 200 million dollar contract, I’m going to be in a pickle.

They will win the cup this year.  Brooks will have the game winner.  It’s like I can see the future.

I also have his pants.  Why?  Don’t ask but we are going to auction the off for Muscular Dystrophy.

2 Responses to Brooks Laich admits Dangeroushockey.com is a hockey blog.