Will Mystery Disease Keep the Blues out of Cleveland?

Obscure blogger and shitty hockey player, Rocco Tremaglio’s potential health problems: Bloodwork may just keep the St. Louis blues out of Cleveland.  “Look, I tend not to overreact to thing.  It’s just a liver.  I think they grow back don’t they?  Hell and I don’t even drink.” said Tremaglio as he was seen leaving his corporate headquarters. 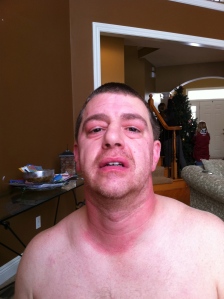 "It's Barnaby or Kingjames, I bet."

Dangeroushockey obtained a copy of the report:

"Proof there is no God?"

Tremaglio maintained that his health was insignificant “Look we got dogs being washed out to sea, and guys taking lunch breaks next to melting fuel rods.  As long as I can still play hockey, I’ll be fine.”

The mystery disease broke out “sometime around Christmas” and has bothered the naughty little blogger since.  Dangeroushockey will continue it’s quest to bring the Stanley Cup to Cleveland.  According to his team of physicians “it’s nothing to worry about.”

2 Responses to Will Mystery Disease Keep the Blues out of Cleveland?