My Electric Conversation with Barry Melrose:

rocque Trem (cleveland ohio): Barry what’s going on? How about those Cleveland Lake Erie Monsters?
Barry Melrose: I’m not sure what the point is but it’s great to see hockey in Cleveland.

Barry, rest assured, you’re not the only one who doesn’t get my point.  And thank you for agreeing to talk with dangeroushockey. You did a masterful job of reading between the lines.  They are winning and it’s indeed, great to see meaningful hockey in Cleveland.  TY.  Also, tell Barnaby hi.  Thanks again for being part of the World’s greatest hockey blog. 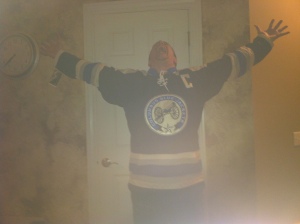 "Hockey will Come to Clevleand, NHL are you listening?"

Note:  This article was written before we were named Google’s Worlds Greatest hockey blog.

1 Response to My Electric Conversation with Barry Melrose: