Not so hot, but one of the best players in league.

“I texted Brett Favre my privates.”

The gender lines have been crossed in many sports.  And never has one been so universally appealing as when one of the hottest (figuratively and literally) chicks in sports, steps on Soldier Field this Sunday to face, “Da Bears.”

We are talking about flowing hair, a great ass (especially in yellow) and most importantly one of the most dominating linebackers in the game, Clay Matthew’s Jr. 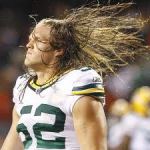 Pull my hair will ya?

She’s playing in a sport dominated by macho men. Stone cold warriors, since the game’s inception.

Phone calls to the Matthew’s camp went unreturned.  Even though I spent over 15 years of my life rooting for her father.

However, this hasn’t been the first time in major pro sports that good lookin chicks have dominated their peers.  While she never won a championship, Ron Duguay

Gotta hand it to New York, they have Avery now...

(please, we’re all better than..) played over 15 years in the NHL.  And a couple of decades later the NHL was dominated by a young female from Czechoslovakia name Jaromir Jagr.

But this is different.  This is the NATIONAL FOOTBALL LEAGUE.  The face of American professional sports.  Sending a wonderful message to the world.  We are open to anyone who cankick the living crap out of another human being, regardless of age, race and now, gender. Way to go.  Good luck Clay.