Yours truly has been reporting all along that Sean Avery’s on ice antics and off ice banging of hot chicks was just a cover up for who she really is.  NOW LET ME BE CLEAR.  I’M NOT GAY, NOR DO I HAVE ANYTHING AGAINST ANYONE WHO IS.  I CELEBRATE him for finally opening up to it.

Warning: the video below (thanks to puckdaddyo) is erotica and may accidently give you a boner you were not expecting:

Now that it’s out in the open, I am willing to get in the Sean Avery felatio sweepstakes.  Dangeroushockey.com would offer $100,000,000 to anyone who let’s Sean perform this act for my blog if I had the money and it were legal.  Since it’s not, I still will step in the ring anytime against him for FREE.  And judging by this photo, I’m not in the best of shape. 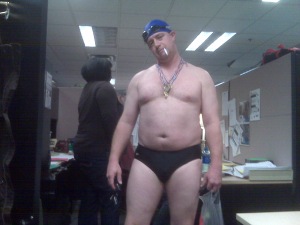 Now that we got this out of the way, I’m glad to be back in action with the blog. I promise you this.  Uncompromising coverage and an NHL team in Cleveland.  They only blog on earth that will matter other than Puckdaddy because he’s my Proof.

Now we know they won’t but the NHL should embrace this type of on ice antic and show the world that “we don’t fuck around” in this league.  Hockey is the single most bad f’n ass sport in the world and you have ESPN hanging from LeBron’s nutsac?  Give me a break.  Let’s go NHL.  This is just the type of shit we need to get my wife to watch!