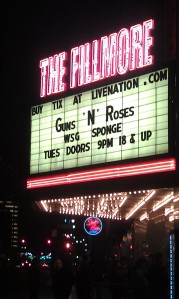 Jim Morrison out from hiding for one special night!

Somehow my hockey blog, which is hated the world over, has now become a quazi Guns N Roses contest/review page.  Fortunately for you, I cannot review concerts they same way you are used to.  I can, in fact, review a concert I never even made it to.

FACT:  I have liver disease.  It’s treatable.  I need to work immediately on this.  NAFLD is the official term.  Who cares?  Well Guns n Roses does.  They actually tweeted me, thank you, thinking I manned up and made the show.  I didn’t.

But Brenda V. did.  My misfortune was her gain. And honestly, I love that she got to go.  Imagine being a Middle School PRINCIPAL for REAL, entering my silly little contest.  Next thing you know, the coolest mother of 4 I’ve ever met, was at her “Travel Agent’s” booking round trip to Detroit from Minneapolis to sit in my seats.

Brenda and her hubby had a glorious time.  She tweeted and emailed till the wee hours of the morning.  By the time the show ended, I was sound a sleep with my CPAP mask and dreams of a better day.  Brenda, on the other hand was just getting started.

Nah, Brenda and her nice hubby had a great time, flew back and she’s now overseeing the future of our country.  Generations of NHL stars to be (it is Minneapolis for Christ’s sake) or rock stars, or WWE politicians.  Who knows.  All I know, is for me to know, that I can share that bond of seeing what is without a doubt the best act/show/concert around, I’m happy as if I went.  Well, almost.  God fuckingdammit….get your shit together Rocco.