Below is the response (Via DIRECT MESSAGE!)

I will make it easy on you! U tweet me way to much !! Bye
Direct message sent by Matthew Barnaby (@MattBarnabyESPN) to you (@dangeroushockey) on Nov 28, 12:15 PM.

The Ex NHL player turned ESPN analyst after a series of unfortunate tweets by dangeroushockey to Barnaby and a group of his friends.  “Shit, I thought the guy enjoyed my tweets.  He RE tweeted 2 for crying out loud saying he LOVED THEM.  Now he appears to hate my guts.”  said DH senior editor any Rocque Trem early Sunday. Although judging by his history he has a hot temper (fight with best friend?)

It’s odd interviewing myself but I do have to question my tweeting etiquette.  I mean it appears that there is some sort of unwritten rule which I occasionally break.  Maybe I do more than I think, as I send my thoughts off to people often.  However, rarely do I get yelled at, and often get complimented and thanked.  I would imagine most of the time, I get ignored, so one may chalk that up for annoying someone.  Based on that, Dangeroushockey.com is imposing a 60 day suspension from tweeting for offending Matt (even though he could have politely told me sooner I was annoying him.)  Kind of Ironic from the 70’s version of Sean Avery.  But nonetheless we will not appeal our suspension and drift into Tweeteroblivion.

To the few fans I have, I will be reading tweets and appreciate any feedback you can provide during this suspension.  As for Matt and his direct and sudden outburst at me (good thing it wasn’t in person he may have dropped gloves, if he still had the guts?), you fill my heart with great sadness and despair.  But I forgive you.
MATT BARNABY PHOTO SECTION INCLUDING PROOF HE ACTUALLY LOVED MY TWEETS JUST DAYS AGO: 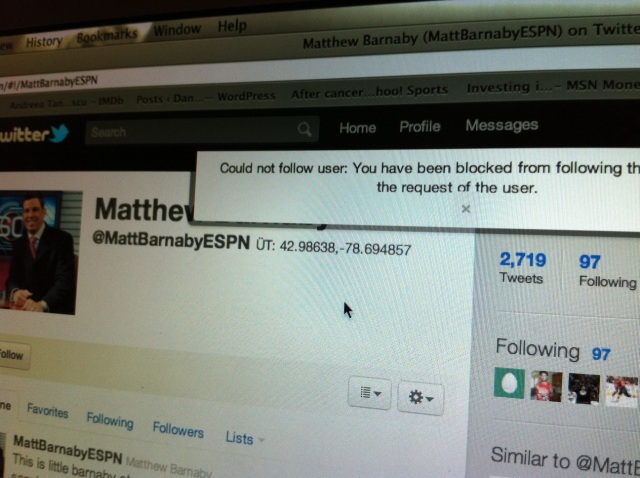 My 5 year old did kick him in face, so maybe this has been simmering??

Just days ago he loved my Tweets, perhaps there's more to story? 🙂