Paranormal Activity in the NHL?

Posted on November 4, 2010 by hockeyrocque

First, I must, for those of you who only read headlines or skim articles, say that my site is not trying to be Hockey News or US NEWS and World Report.  We are fucking around.  Consider us the Onion meets Howard Stern (although not nearly as good) hockey Blog.

Yesterday, I was personally insulted by a “serious” unnamed play by play guy for my unsubstantiated story about the Jackets moving to Cleveland.  LOL.

Onto Paranormal Activity.  Last night:  Devils beat Hawks.  Crosby drops gloves and while one can explain those things in somewhat logical manner, the craziest thing was that Coyotes defenseman, Ed Jovanovski, scored a HAT TRICK! 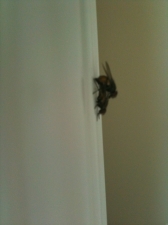 Here’s a guy who averages less than 10 goals a year and let’s just say his job isn’t to score.

I’m sorry today’s post cannot be more compelling but I am busy and constipated. Which means, I have a lot of shit on my plate and in my colon.

I tried to do ONLINE puck talk with these two “serious journalists” who cover the Jackets yesterday.  They wouldn’t post ONE of my questions because they were busy covering important topics like how the YOUNG NHL players handle media pressure.  I literally thought I was dreaming.  It was the most boring thing I’ve ever witnessed.  I think.