I’ve reconsidered my position with ESPNCleveland and after careful consideration and meetings with upper management, I’ve decided to continue the experiment now known worldwide as “THEblog.”   This blog will endure. Today, I tell you this.  I congratulate all of the Chicago fans, players and organization.  It’s amazing and I would imagine an amazing feeling.  I love Chicago as a city.  I lived there for a year and it’s everything Cleveland could be but isn’t.  Now granted, they had many more savvy and sophisticated corrupt leaders than Cleveland, which put them on the map and they never looked back.  Dating all the way back to the Al Capone days.

Good for them.  Cleveland meanwhile, really is (and I’m one of them) a town full of losers.  See the team below, we LOST. 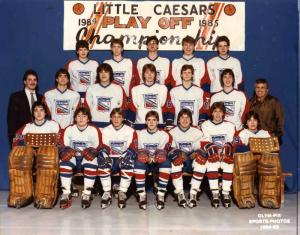 "look how stoned our goalie was before game"

2-1 in the finals at Joe Louis Arena despite outshooting the Compuware team 33-11.  Everyone on my team cried.  I didn’t.  I rarely cry.  We actually were a pretty good team of misfits that got better as the season went on.  We were the only team from Cleveland (or any other city for that matter) that was in this elite Detroit league.  In the end, we were the best team, but the scoreboard said otherwise.
Another Cleveland choke?  A microcosm of the curse.  The big picture, the movie with the same ending.  Now the city is focusing all of it’s energy, millions of dollars in marketing dollars, grassroots efforts all to keep one man, THE KING, here in the city.  Now, let me be blunt.  This is pathetic.  If he doesn’t want to play here.   Go.  I think we have many other causes that warrant our energies, monies and attention.  Don’t you?  “Well he means so much to the economy.” said one dummy.

“THAT’S the PROBLEM you IDIOT!!!!!!”   I wanted to scream but they wouldn’t understand.  To have a city hinge on a 25 year old basketball player?  Um, can someone hit me in the head with a slapshot?  I promise, I will fix this.  I will do everything I can to fix this.  But you need to read.  Read my blog.  Daily.  Day by day, piece by piece, we can, together, fix this city.  NOT BUY SIGNING LeBron James.  Where is the KING?  Is he down in the GULF helping out like Drew Bledsoe the QB of the New Orleans Saints?
Is he in Arkansas helping the flood victims?  Are we?  No we’re having SAVE LeBron parties.  I wish I could swear here, but I’m forbidden by Walter Disney.  Rest his soul.  But let me tell you, he wouldn’t sign Mickey Mouse, if that mouse didn’t want to give back.