It’s a far cry from the finals just a few years ago when droves migrated downtown with their LeBron Jerseys, and Boobie (daniel gibson) beads.  As the city gets ready for what the entire world has been waiting for:  King James vs. Kobe.  Warriors so dominate that they’ve been handed the keys to the world.  Free to rape (allegedly) and pillage all for the greater good of the NBA.   As Cleveland scrambles to ready themselves for this heavyweight fight, there’s one problem.  The King has been assassinated.  Like King Gustav III of Sweden, who was killed at a Masquerade ball in 1792.  Eerily, one can see the similarities between this massacre and the one the Doc Rivers did on The King and his Kingdom.  Every fan saw it, a masquerade ball (basketball) of Cleveland impostors that left us asking only “Who were these guys?”  The only logical answer is they were impostors in Hollywood quality costumes, minus the talent playing vs. Boston.

So instead of media scrambling for access, ticket brokers buying and selling the same tickets day and night, Budweiser directed viewing parties to various bars (including PJ MCINTYRES and Quaker Steak and Lubes).  Thousands of phone calls, discussions, speculation, anticipation, wagers, parties etc, Cleveland is left once again with, as big Fat Clemenza said in The Godfather, with our hands filled with something other than the shot at Citywide glory.  Glory that would only make us feel worthy.  Worthy of what, I’m not certain.  But at least worthy of doing a bunch of partying and the things I mentioned above.

NHL, Stanley Cup day II.  Once again, I was exactly right in the Hawks would win by 1. However, I was clearly wrong in the total.  11 goals in a Stanley Cup Final, Game 1?  “Are you kiddin me?”  Apologies to Nissan of North Olmsted for stealing their tag line.

June 4th, 2009, Max and Rocque are at the actual game.  Max literally would not leave his seat for a moment as he was having no part of cotton candy or dad’s beer, he was there to watch hockey.  And watch hockey he did.  Finally after period #1 ended, we convinced Max that watching Iceberg wasn’t worth missing the fun upstairs (as we had full bladders).  For those of you who don’t know the Igloo, they have the old urinals which means essentially ONE GIANT urinal!  Max found this particularly hysterical.  While he whizzed away, I had a bit of stage fright in front of the boisterous Penguins fans.  After attempting to wash our hands (they literally don’t have flowing water or SOAP!) we made our way back to our seats. 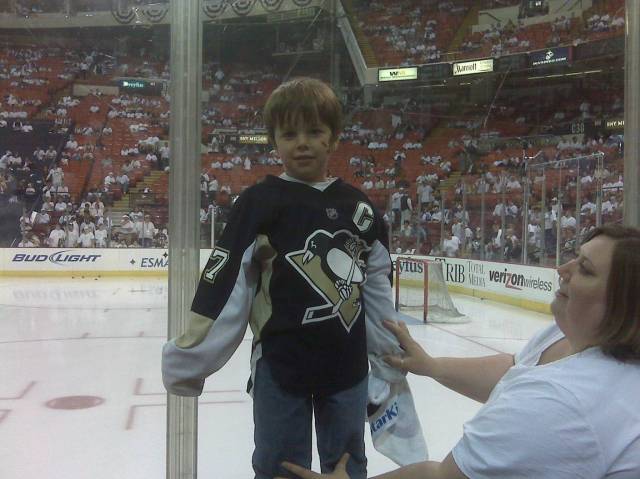 As we approached our seats, there was a GIANT standing in our seats talking to the people in front of us.  As I did often over the day, I told Max to go beat him up.  Keep in mind he’s 5 but at least as tough as a 7 year old  (really 12 or 13 year old he’s tough as they come)  So Max makes his move towards the mountain of a man fists swinging.  The man turns just in time to catch a right in the leg from Max.  He laughs as it’s obvious that Max is having fun with him.  He picks up Max.  Puts him up over his head and fakes like he’s going to throw him on the ice several times (we were in row 4).  He then proceeded to have some fun beating Max up while Max did his best to win.  Not defend, but WIN.

Needless to say, EVERYONE watching this was clearly entertained.  Especially by the fact that Max wouldn’t be intimidated.  Then some lady whispered to me “Do you know who that is?” Of course I had no clue.  “He’s the center for the Pittsburgh Steelers.”  I forgot his name sorry but he was a giant mother.  After Max came back to me, I told him who he was fighting, which his response was “I don’t care Dad, I don’t care, I’ll fight that football guy.  He’s not a hockey player.  I play hockey.  I don’t care dad!”

More to come on the greatest night of sports in my personal life, not to mention one of the greatest NHL finals in recent memory.  I have no doubt in my mind Philly doesn’t stand a chance tonight.  It’s over.  They blew it Saturday.  But there should be some good action.